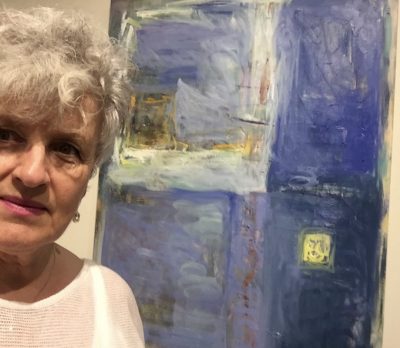 There she learned Secessionism, Dada, Jugendstil, Abstract Expressionism and Impressionism in music, aRt and German/Austrian literature at Modeschule Hetzendorf  and Linzer Akademie fur Kunst.  She studied with  Austrian artist Josef Schützenhöfer.  aNna earned B.S. while on active duty U.S. Navy (1976-2000), was commissioned as an Ensign (1981) and earned M.A. Ed. degree on active duty (1990).  When she left the service, she earned B.F.A., Old Dominion University, 2010 thru generous G.I. Bill benefits and sought to re-establish her aRt career.  She explored color as a substitute for normal expression.  Gender and rank no longer held authority  and she became a professional artist.

By using color to represent things other than things and taking a “leap of faith” (literally: aNna trained as a parachute rigger and counts 21 jumps while in the service…) to loosen from the discipline and rigors of military conformity, she began to reclaim her commitment to an inner voice.    aNna is proud of women’s integration — no — elevation within the armed forces and in the aRts.

aNna uses the discipline, focus and energy of her previous occupation in creating large, sweeping canvases:  Fields of Color.