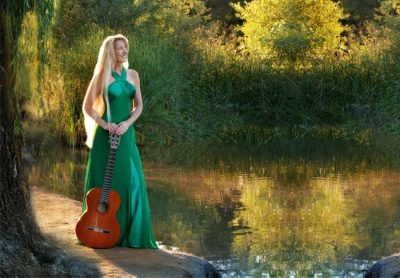 I started playing the guitar at age 5. My early training was heavily influenced by Spanish and Latin American composers, as I studied extensively with guitarists from Spain, Greece, and North America.

I began my studies at the San Francisco Conservatory when I was in high school, and gave my first solo concert when I was 17. I continued my private studies there through my 2nd year in college. I also had the immense privilege of performing in several Master Classes with my most significant mentor, Christopher Parkening, whose influence led me to many years of disciplined study of guitar technique, and to strive for excellence in musicality as well as in life itself.

My musical career has taken many turns through the years, teaching and performing in several different venues, namely Acoustic, Classical, and Inspirational. The past 10 years have been devoted to the writing and arranging of the pieces for my 2 recordings, Luminaria and Splendor. In these recordings I have combined all the years of study in guitar technique together with the life experiences which give the music depth and passion, and utilized the gift of 6 and 12 stringed guitars, as well as full orchestra and selected solo instrumentalists to enhance the beauty and the creativity of the music. It is my great pleasure to share this music with audiences of all types around the world.