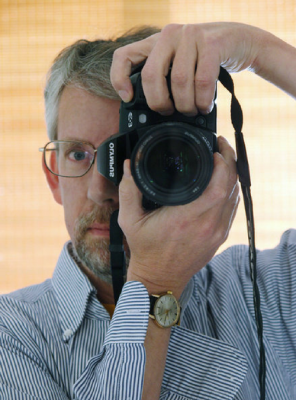 I am originally from New York. I lived in Brooklyn as a child, but spent much of my youth in Ohio and later moved to Japan after spending a year there as a high school exchange student. After a year at Webster College (now University), in St. Louis, I earned an undergraduate degree in Japanese and a master’s degree in modern Japanese literature at Ohio State University and then moved back to Japan more or less permanently, living there between 1984 and 2000, mostly in Tokyo. I relocated with my family to Santa Rosa, California in 2000 and have lived here since.

I am self-taught and active in a range of media, including drawing, painting, printmaking, collage, and photography. I got interested in photography at the age of eight and began drawing at an earlier age. Figure drawing has been a life-long interest, and the nude has figured prominently in my photographic work as well. In the realm of abstract art, I have worked extensively as a printmaker and more recently in collage. My printmaking has included traditional methods such as etching and woodblock printing, but many of my prints use methods of my own—for example, printing from corrugated board and from found objects such as twine, bubble plastic, and paper cutouts. My collage work is abstract and painterly, using monotypes I make myself and, less commonly, found paper artifacts.