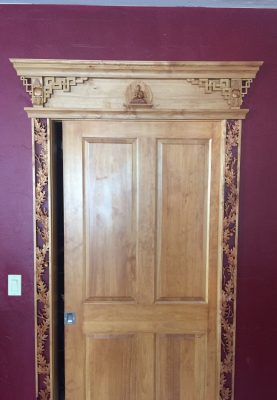 Colton Measles is a 30 year old artist and wood carver from Colorado and recently moved to Sonoma County in mid December of 2017 to pursue and further his work as a professional decorative woodworker. Coltons work has developed through the creation of stand alone visual art pieces crafted from wood such as scroll carvings, high and low bas-relief, engravings and fully relieved sculpture.

Colton has studied extensively and has a close relationship with Craig Hone of Provo Utah, the only professional wood carver and artist to win both first and second place prizes in the Northern Nationals Carving Competition and also a two time winner of the Dixie Invitational as well as winner of the Carvers Cup Competition in Park City UT. (Craig’s work can be seen at craighonestudio.com)

Colton has also been instructed in the creation and application of custom wood stain glazing techniques for bas-relief and sculptural wood carving and fine wood finishing by Robin Coalson, another friend and teacher. (Robins work can be seen at robincoalsonstudio.com and some of her work is on display at the D’Artagnan Vineyards in Sacramento California.)

Colton was born and raised in Durango Colorado, where he developed skills in wood carving and sculpture over the course of four years, having been a student of art and artists of other mediums since his youth. Immediately before moving to the Sonoma County area from Colorado he had been working as an artist and woodcarver full time for three years in a wood shop and studio attached to his former residence. Colton has a background in construction and loves applying his craft to interior, and, although less often, exterior architectural carving. He was at one time commissioned to create four separate stand-alone art pieces for the Durango Dharma Center; A nonprofit meditation community closely linked with the Spirit Rock Meditation and Retreat Center in Woodacre California, just north of San Rafael. One of these pieces was a high relief carving including highly relieved birds and lotus flowers in a wonderfully harmonious and flowing design layout and two were functional and decoratively carved wooden boxes for the collection of donations. The fourth was a decoratively carved stand for a Tibetan singing bowl. (These pieces are on constant display in their current location and can be seen on Colton’s Instagram page @truenaturecarving)

Colton’s art is influenced by many traditional mediums. He has studied acanthus scroll and the systems of its design as well as Celtic knot work and depicting all ranges of natural vegetation with a focus on realism. Colton enjoys utilizing design themes from traditional oriental carpentry, in furniture as well as architecture, in his work and has dedicated much time to the study and creation of anatomically correct creatures of all sorts, including fish, birds, animals and insects.

Colton is inspired by ideas of cooperative pursuits with other artists and crafters, and by benefit work and his door is open to all inquiries of the kind. His contact info is included in his profile here on creativesonoma.org