Reckless, boisterous, raucous, unusual, or just plain modern? However you describe her art, it will never be accused of being subdued.

Katherine Spiering is a fine arts and multimedia graphic illustrator who creates art with attitude. Originally from Seattle, she broke out of the classical confines of her early parochial schooling by packing up and heading for distant exotic lands. Later, she hung out with Seattle’s Belltown Art crowd, an artist encampment in the Denny Regrade area.

By the time she had completed a year at the Cornish School of Allied Arts and earned a degree in Psychology from the University of Washington, K. had developed an artistic eye by viewing life through the lens of a camera and by shooting images of her travels abroad as well as in her own backyard. In the early ’80s, she presented an entire Polaroid exhibition called “Void Space,” a collection of graffiti art photographed in Seattle’s downtown Skid Row district. She was influenced and excited by street art, geek (or skin) art and just about everything else out of the ordinary.

Today, that influence is reflected in her paintings as a kind of high-amped energy with raw symbology and a spontaneity fused with her own sense of humor. For example, there is her portfolio of radical canines, a lively and diverse depiction of dogs created in multiple media, and a far cry from the fuzzy faces found on brochures for the American Kennel Club! When asked, “Why dogs? 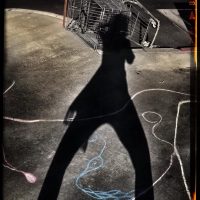 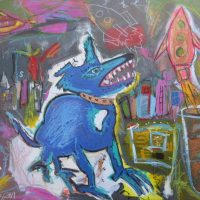 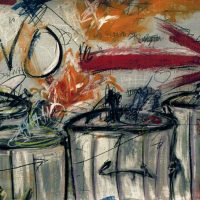 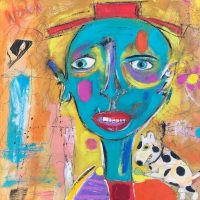 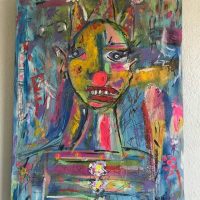