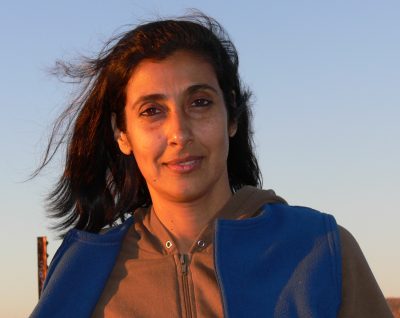 Maya Khosla is the Poet Laureate of Sonoma County for 2018-2019 and is working on The Local Legacies Project.

Her new poetry book, “All the Fires of Wind and Light,” is forthcoming from Sixteen Rivers Press in 2019. Maya’s previous wildfire and fire safety films have made an impact on communities and non-profit groups across California and other parts of the United States. In 2016, 2017, and 2018, rough-cut and final versions were screened and/or discussed at over 60 venues, including a public event held at The Sitting Room (October 14th, 2017, during the Sonoma Fires), where Firewise and related materials were presented along with a poetry reading. The poems were inspired by traditional herbs used to enhance the body’s ability to treat smoke exposure. The screenings and post-film discussions resulted in a sense of hope, joy, and also immense public support for our natural areas that are rejuvenated by wildfire.

Immediately after the October 2017 fires, KRCB Public TV aired parts of Firewise, Maya’s ongoing film project, and they recently aired her first fire film, Searching for the Gold Spot: The Wild After Wildfire (night of August 7th, 2018). The powerful visuals in the film have inspired a new perceptions about our natural areas, brought an understanding about focused fire protection measures and leaving natural wildfires in the wild to their natural processes to dramatically reduce risks to homes – as been shown by thousands of case studies. A trailer for one of the fire films can be seen at https://conbio.org/publications/scb-news-blog/fire-works.
Maya’s work has been supported by grant-awards from Patagonia, The Sacramento Audubon Society, Fund for Wild Nature, and Environment Now. Maya has since written essays devoted to post-fire forests, including “Forests Rebound on Their Own “Faith in Rejuvenation” and “Pioneers of the Post-Fire Forests.”