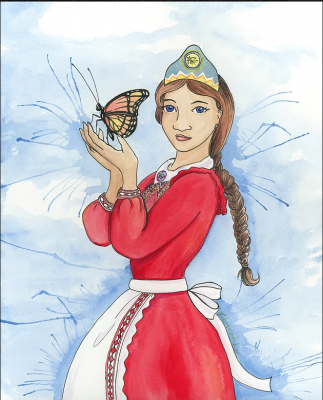 Born in 1987 and raised under the redwoods in Sonoma County, California, Merisha Lemmer emerged from the mossy forest floor and her huge, loving family with a belief that she could create beautiful things, change the world and inspire people to love. Her paintings and illustrations are infused with a bold optimism and tender intimacy with the world around her.

Her journey began in 2003 when she was awarded a competitive admission and scholarship to The Oxbow School in Napa, California. She then went on to attend the prestigious Savannah College of Art and Design, earning a Bachelor’s of Fine Arts in Illustration in March of 2009. During her college years, Merisha spent a semester in Lacoste in the south of France, and while there, she created a children’s book featuring the insects of the area, starting her journey to being a published illustrator. Afterwards, Merisha went on to create book projects with her family. She recently completed a book for The RoadRunner Press called Little Red Riding Boots and is currently working on more to come summer 2017. Merisha continues to produce illustrations for books and individuals.

Since graduation, Merisha has created painted portraits for individuals to celebrate special moments on Valentine’s Day, anniversaries, birthdays and the like. Proud of and connected with her Choctaw heritage, Merisha also frequently paints around Native American themes. Her watercolor paintings with ink line work have a vibrancy of color, and her talent for communicating affection for her subjects shines. Her art is about expression, and what is inevitably expressed is joy.

Merisha’s work has appeared in the Southern Poverty Law Center’s Teaching Tolerance Magazine and inSnag Magazine. Merisha has also created art for Habitat for Humanity of Sonoma County and Ya-Ka-Ama Community Gardens and has had several shows in Sonoma County, California. Her art has also been exhibited as part of larger shows at Electric Rose Gallery and Occidental Center for the Arts, and her piece Coyote Harvest won first place for Best Media at the Sonoma County Fair. She was the featured artist for the annual may 2013 Choctaw trail of tears walk. Her art was featured on post cards, calendars and t-shirts and in the tribal newspaper.

Currently, Merisha is living in beautiful west Sonoma County, California and expressing her love for life through watercolor, ink and her Chihuahua mix T-Bone. She is currently at work on s commissioned colorful portraits of people and animals, as well as book illustrations and she runs an art studio in Santa Rosa called The Beluga and Bee Studio. She can be hired for portraits, illustrations and to create images for a variety of purposes.