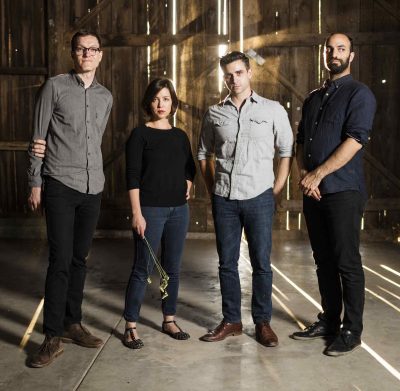 Petaluma, CA’s Trebuchet all met while attending music school at Sonoma State University, although it wasn’t until four years later in 2010 that its four members decided to form as an indie group.

With reliance on an expansive dynamic range, Trebuchet employs lush 3 and 4 part harmonies as the connective tissue in the many musical genres that they traverse through the course of any single piece of work.

2018 saw the release of two passion projects in the form of That’s What Friends Are For and Spend Your Christmas With Us. The former being a collection of covers and remixes of Trebuchet songs by local and national artists (Judah Nagler of The Velvet Teen, Emily Whitehurst of Tsunami Bomb, Survival Guide) and the latter being a collection of original and classic Christmas songs performed by Trebuchet.

Not showing any signs of slowing down, Trebuchet is currently working on their third full length album, titled It’s Fine, I’m Fine, to be released Q2 of 2020.