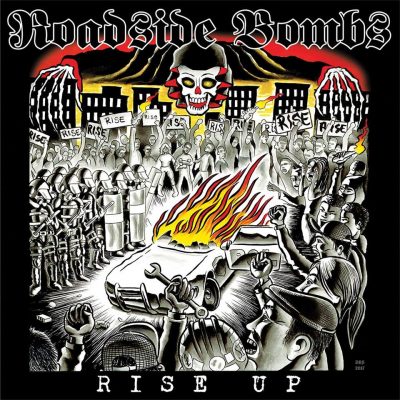 Having formed in 2008, The Roadside Bombs are collectively hardened veterans of the Sonoma County punk rock scene featuring former members of, to name a few, The Bodies,The Muggers and The Burdens and have already graced the stage with bands such as Agnostic Front,The Templars and Pressure Point.

If the EP’s front cover is anything to go by, or indeed the bands name, you would be forgiven for thinking this to be yet another overly political anti-War offering by a band who take themselves far too seriously. It isn’t, and they don’t.

This of course is not to say The Roadside Bomb’s lack a message in their punk rock manifesto, far from it. It’s just the message is pleasantly tucked away amongst their raw yet melodic appeal.

We kick off with the EP’s title rack, a strong opener that acts as a perfect foundation to vent. The band sing: “Bring our heroes back where they belong, before they’re dead and gone”
An obvious and heartfelt message stands at its core, that with todays many wars, enough is surely enough.
The track draws to a close with a flourish. It’s often folly to include to a guitar solo in a three minute song. Not here. My only complaint would be the bass level throughout the track seems slightly off. Not fitting in as well as it does elsewhere on the record.

Second up is the frantic ‘Tax Revolution’. I have never seen The Roadside Bombs Play live, but I imagine that when they play this, good things happen. Calories are lost by the bucket. At times straying pleasantly over to the hardcore side of the street, this track is an EP highlight.

With ‘My Side’, the EP’s shortest track at just under two minutes, we see that famous punk swagger in the form of confident vocals:
“You better watch your back on my side of town”
Another melodic number that again benefits from great guitar work.

Lastly ‘One Two’ brings to an end what is a very solid release. Over just like that, you are left wanting more, much more. An album. A show.

While The Roadside Bombs won’t win over many with originality, they will undoubtedly make many an ally with their earnest, heart on the sleeve punk rock. You already like punk, you know that, so go and like The Roadside Bombs.” -Treading Water