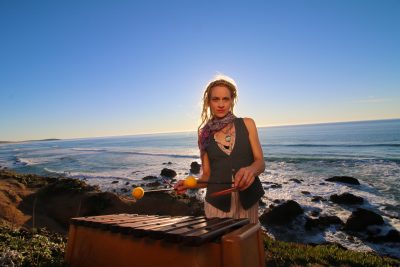 Floating from the Czech Republic, by way of the Netherlands and Boston, and now based in Forestville, Lenkadu is an electronic music performer active since 2010.

Her sets combine the power of a DJ with the vulnerability of a live performer. She samples her field recordings, makes beats, plays drums and processes her voice as well as a range of instruments, while controlling Ableton Live software with her feet. Lenkadu draws inspiration from nature sounds to anything that ‘inspires to’ – pop, classical, electronic music and, believe it or not, metal.
Building on extensive experience as a touring VJ, video is an integral element of each song and projected behind Lenkadu on stage. She creates her visuals from photos and video content she shoots around the world. Lenkadu’s shows are ethereal and psychedelic experiences fueled by an empowered yet gentle vision of personal transformation and collective consciousness.

Touring
Lenkadu’s notable appearances include opening for acts such as Bassnectar and Lotus.

All live shows are streamed via Facebook live on @Lenkadu page