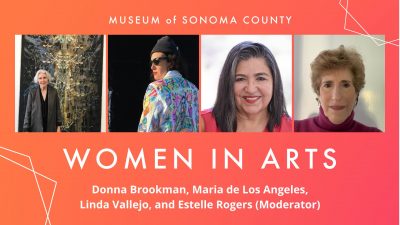 Presented by Museum of Sonoma County at Online/Virtual Space

In honor of Women’s History Month, join us for a panel discussion featuring Donna Brookman, Maria de Los Angeles, and Linda Vallejo, three artists from 35: Thirty-Five Artists for Thirty-Five Years. Moderated by Estelle Rogers, the Museum of Sonoma County’s Art Committee Chair and Board Secretary, this discussion will focus on the lives, work, and experience of each panelist.

Donna Brookman’s lifelong practice as a painter has been strongly influenced by making artist books and prints. She has created an abstract language suggestive of both natural phenomena and a deeply internal response to the world. Her interpretation of the creation myth in Ovid’s Metamorphosis (translated by Ted Hughes) was exhibited at 5&5 Gallery in Brooklyn and Seager-Gray Gallery in California. Her recent collaboration with poet Anne Barrows began with spontaneous drawings of moving water, which in turn became the impetus for Barrows’ suite of water poems and their artist book, riverrun. A further suite of River Scroll prints produced at Magnolia Editions led to her most recent body of work, Palace of Memory, a narrative sequence of thirty-nine large paintings. These are essentially abstract but with a narrative undercurrent suggestive of cycles of destruction and renewal. Her work is included in the collections of the Berkeley Art Museum, the Bancroft Library, Kala Institute, and other private collections. Her most recent solo painting exhibition, fullflood, was at Thomas Paul Fine Art, Los Angeles, California.

Maria de Los Angeles is a multidisciplinary artist who addresses issues of migration, displacement, identity, and otherness through her drawing, painting, printmaking, and fashion. She holds an MFA in Painting & Printmaking from Yale School of Art (2015), a BFA in Painting from Pratt Institute (2013), and an Associate Degree in Fine Arts from Santa Rosa Junior College (2010). She was awarded the Blair Dickinson Memorial Prize by Yale University (2015) for her artwork and her role in the community.
De Los Angeles has been an Artist in Residence at several notable institutions such as the Massachusetts Museum of Contemporary Art (MASS MoCA), El Museo del Barrio in New York, the Los Angeles County Museum of Art (LACMA), Mana Contemporary in New Jersey, Oregon Center for the Arts at Southern Oregon University, and the Schneider Museum of Art in Ashland, Oregon. Her work has been featured in several recent exhibitions, including shows at Pelham Art Center,Colorado Springs Fine Arts Center, Los Angeles County Museum, IPCNY, Every Woman Biennial, Self Help Graphics, John Jay College of Criminal Justice, St. Johnʼs University, Robert Mann Gallery, E.TAY Gallery, and the Museum of Sonoma County.

Linda Vallejo creates work that visualizes what it means to be a person of color in the United States. She states that these works reflect what she calls her “brown intellectual property”—the experiences, knowledge, and feelings gathered over more than four decades of study of Latino, Chicano, and American indigenous culture and communities. Her numerous solo exhibitions include LA Plaza de Cultura y Artes (2019-2020), Kean University’s Karl & Helen Burger Gallery, The Museum of Latin American Art in Long Beach, and bG Gallery in Santa Monica among others.  Her most recent solo exhibition Brown Belongings was featured in both the New York Times and the Los Angles Times. Vallejo’s work is in the permanent collections of several institutions including the Museum of Latin American Art, the Museum of Sonoma County, Museo del Barrio, National Museum of Mexican Art, Carnegie Art Museum, and the Natural History Museum of Los Angeles County.