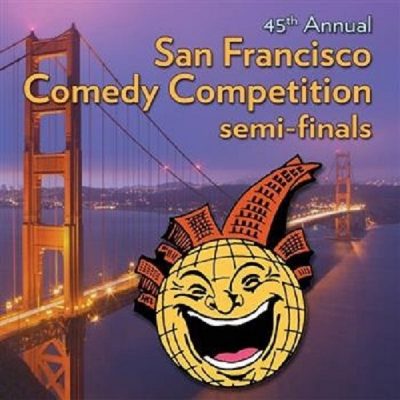 Hundreds of comedians audition each year to compete in the San Francisco International Stand Up Comedy Competition.

Become a member to buy early and guarantee your tickets.

The San Francisco Comedy Competition is one of the most prestigious comedy events in North America—launching the careers of people like Ellen DeGeneres and Patton Oswalt. It’s an outrageously funny evening where you will see the comedy stars of tomorrow competing for their chance at fame and fortune.

Hundreds of comedians audition each year to compete in the San Francisco International Stand Up Comedy Competition.

In its first year, Robin Williams came in 2nd.

Many talented comedians have since emerged from this annual event to become major stars. It could be argued that The Comedy Competition helps turn them into diamonds as it is a true contest that develops its contestants by forcing them to adjust to a variety of audiences—in comedy clubs, colleges, casinos and theaters—while enduring the strain of an extended road trip.

Comedy Competition champ of 1977, Dana Carvey went on to “Saturday Night Live.” The 1979 champ Marsha Warfield went on to star as Roz the bailiff on “Night Court.” The 1982 finalist Kevin Pollak has achieved a major film career, as has 1987 finalist Rob Schneider.

Two first runners up—Ellen DeGeneres in 1985 and Mark Curry in 1989—landed their own TV series. Since appearing in the competition in 2011, Jimmy O Yang has gone on to join the cast of “Silicon Valley” and made a scene stealing appearance in the movie, “Patriot Day” that has Hollywood talking.

With this history and much more, the San Francisco Comedy Competition has a well-earned reputation as an important showcase of young entertainers who will make it.