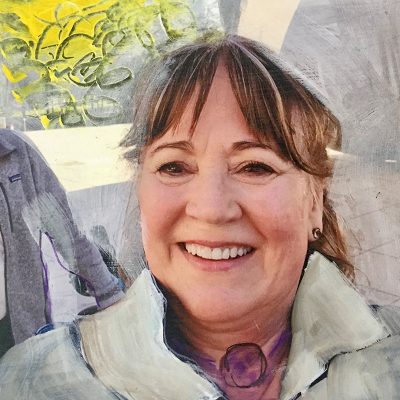 Monica Bryant is a mixed-media artist. She was born in Kansas, received her BA in Art from the University of Hawaii and her MFA from UC Berkeley.

In 2004 she was awarded a fellowship at Skidmore College, Saratoga Springs, New York. Bryant is a credentialed Art Teacher who chaired the Art Department at Ursuline High School in Santa Rosa, CA for nine years. After Ursuline closed in 2011, Bryant instructed drawing and color theory at the Fashion Institute of Design and Merchandising (FIDM) in San Francisco. She also became the art teacher at Brush Creek Montessori School in Santa Rosa until June 2014.

Bryant is a Sonoma County Art Trails Artist and her work has been exhibited nationally and in Singapore.

Influenced by her international travel experiences, including the three years she lived in Singapore, Bryant created distinctive remixed photographs of South East Asia in the 60’s. The photographic mixed-media works were exhibited in the San Francisco Museum of Modern Art, Caffe Museo, October 2005.

Bryant’s past work includes a large rebar and fiberglass apron, papier-mâché objects and paintings and drawings. In a newspaper article years ago, Khysie Horn said “Bryant is a conceptual artist who invites reflection and introspection”.

In 2002 Bryant was the lead artist for the mural on the Press Democrat Building entitled The 50 Who Shaped Sonoma County in the 20th Century.