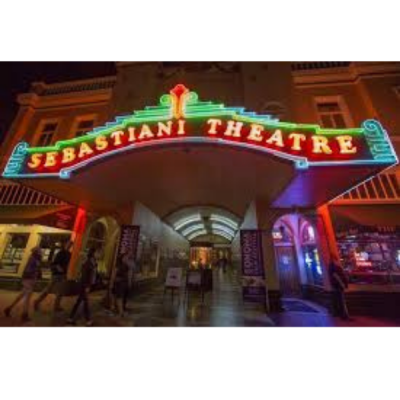 The Sebastiani Theatre plays a central role in the cultural, recreational, and educational life of our community. Just as the Theatre itself shines as one of the most memorable features of the Plaza, it also occupies a place in the hearts of many Sonomans. Over the past 25 years thousands of young people have performed in Witchie Poo Halloween shows, holiday shows, and Performing Arts Camps. Families cherish Roger and Diana Rhoten’s passion for the performing arts as a generator of leadership, self-confidence and creativity in their children. And going to a movie or a live performance at the Sebastiani is one of the defining experiences of life in our town.

The Theatre has always brought the finest in film entertainment to Sonoma. With more screening areas we can do even more, bringing film series that will appeal to a variety of special interests — films from other countries, cult classics as well as the standards, films that are “vintage” to the younger generation (Karate Kid or ET, anyone?) innovative food and film pairings, and even mini film festivals.

The Sebastiani hosts many wonderful live performers, and with a new green room and an updated stage area, we can attract a great many more. Classical concerts, dance troupes, magic and cabaret, great names in literature, the arts, and politics—all will be able to bring their talents to enrich the artistic and intellectual life of Sonoma.

Nurturing the creativity, self-confidence, and talent of the next generation has always been the heart-felt mission of the Theatre. The Performing Arts Camp in the summer, Witchie Poo in the fall, and the holiday show in December are part of what mark the seasons in Sonoma. Generations of young people come back home to sing along with Witchie Poo; many of Sonoma’s young people have gone on to successful careers in the performing arts, and Roger and Diana Rhoten are trusted mentors to hundreds of young people who have found a second home at the Sebastiani.